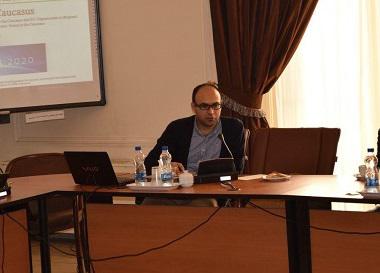 “If Georgian officials want foreigners less and less to buy property, they should review their laws rather than enforcing entry restrictions”

Accent’s interview with Hamed Kazemzadeh, Ph.D. at the center for East European Center and the Author of the book ‘Georgian Culture and people’

-Taking into consideration the recent incidents, there is an impression that relations between Georgia and Iran are getting worse and worse. How do you think, is there a basis for this opinion? how would you assess current relations between the two countries?

-Unfortunately, according to this news, in Iran, we also see a negative look toward Georgia in the press and social media, which makes it difficult relations for the two countries in the future, especially the relations between peoples. Apart from political relations, public relations have a long history among the two nations that should not be ruined by some few negative news. It's easy to break down relations and send negative pulses in the media, but it's much more time-consuming to get positive and returning at the beginning point. In general, the positive atmosphere that had formed about Georgia and Georgian in Iranian mentalities over the past few years and made Iranian tourists the one of highest ranking in Georgia, created a huge capacity for the Georgian side, which, I know it was without the cost and advertising, flooded the Iranian tourists toward Georgia. Certainly, these events will also affect political-economic relations, and we will see a decline in the short term.

-A short time ago one of the Iranian lawmakers did not rule out that Iran would reconsider the visa free travel agreement with Georgia. In your opinion, how real is this?

-This survey was conducted in the Iranian parliament and the Ministry of Foreign Affairs, and in the past weeks, meetings have been held with Georgian counterparts in Tbilisi. This depends on the dialogue between the parties and cannot be canceled emotionally and unilaterally. According to news reports, Iran's ambassador to Tbilisi has been in contact with the Deputy Foreign Minister of Georgia, deputy minister of justice, advisers to the prime minister, chairman of the Georgia-Iranian Parliamentary Friendship Group, and has discussed about the problems for Iranians.

The last development was the official meeting between Georgian Deputy Foreign Minister Khvtisiashvili with the ambassador of Iran to Georgia and the representatives of the Iranian delegation chaired by the head of the consular department of the Foreign Ministry of Iran. Both have agreed to refine provisions in the Georgia-Iran visa free deal to decrease the cases of misusing the agreement. The Georgian Foreign Ministry reported that the issues when Iranian citizens violated border-crossing rules, were frequently due to “a lack of necessary information” of Iranian citizens crossing into Georgia, and stated there was a need for an information campaign for Iranian citizens regarding the Georgia-Iran visa free agreement. It has been agreed with the representation of Iran that through the cooperation with the Georgia government, information materials will be made regarding the crossing of the Georgian border, regulations concerning business activities, medical treatment or receiving an education in Georgia. The Iranian government will spread the information via appropriate state agencies and organizations. I think generally it can help to reduce these problems.

Although I personally agree to cancel the free visa regime between two countries, and I have believed that from the first day, it was a wrong policy and Georgia should not have reached the agreement with Iran in this case. Issuing the touristy visa at the entry boarders with reasonable prices, such as before 2010, was the best way to attract Iranian tourists and to avoid creating a negative impact. Over the past years, many times during my meeting with Georgian officials in previous governments, I have pointed out that the Georgian society does not have the tolerance of enormous Iranian presence as the tourists or as the residents. The free visa regime will bring a large number of Iranian tourists to Georgia at once, and will undoubtedly lead to a negative reaction to the Georgian public opinion and, in the long run, hurt the cultural, historical and political relations.

-We cannot say that it has wide scale, but there are anti-Iranian attitudes in Georgia. In your opinion, what promotes stirring up these attitudes?

-I totally agree with your opinion. Such an attitude against the Iranians, which has made a lot of investments in the housing and business sector, does not exist in Georgia. According to data provided by Georgia’s Ministry of Internal Affairs, 434 Iranian citizens were denied entry to Georgia in November. Additionally, 1151 foreigners in total have been banned from entering this country.

In general, I do not like this method for a touristic country like Georgia, but I understand that the security environment has changed as the major presidential elections in Georgia have occurred, and these collisions are likely to be due to short-term security policies. It was good that, before the elections in the news agencies, they officially announced restrictions for a certain period that there was no misunderstanding.

In my opinion, radical and conservative medias are stirring up these attitudes in both countries. For example, in Iran's radical media, there is a look that the stricture of entering has increased towards Iranian citizens and tourists after the departure of John Bolton to Tbilisi. Or in the radical media of Georgia, they have an Islamophobia and historical look to the existence of Iranian tourists or Iranian investors. I think both point of views is totally wrong.

-Iranian tourists and investors were one of the most important sources for Georgia's economy. However, we have recently been informed that business conference scheduled for December 14 postponed. As far as I know two Iranian investors were refused to enter Georgia. In your opinion, what the consequences will have such approaches?

-I'm very sorry to hear this news. I think that regarding the Georgian elections and the security situation, the organizers of 'Challenges of Iranian Investors in Georgia' summit had to think more about facilities of entry. But in general, I do not think that this particular event will have a particular impact on the relationship in the future. It is the only food for the radical and conservative media, especially in Iran. You should add this to the news that, at the almost same time as the cancellation of this summit, the Conference of Iranian-Georgian Cultural and Economic Relations took place in Bakuriani resort under the Caucasus International University.

Iran and Georgia economic and political ties will only change due to the pressure of the United States on Georgia and sanctions against Iran.

-Yes, as I said, unfortunately, relations are reduced at the political and economic level. But in my opinion, Georgia should use the tourism capacity of the Iranian people. In recent years, Iranians have been among the highest number of tourists to Georgia, along with Russians, Turks, Azeris and Armenians.

Most of this misunderstandings return to the existing laws in Georgia itself, which I think if the officials want foreigners or Iranians less and less to buy property or to register the business, they should review their laws rather than enforcing entry restrictions.

Also, the decline of Iranian tourists in Georgia will increase the number of Iranian tourists in Cyprus, Turkey and Armenia. Therefore, the Iranians do not lose anything, but Georgia loses much of its tourism income. I recommend that the Georgian National Tourism Administration, in cooperation with the foreign affairs ministry of Georgia, make special arrangements to prevent these problems from occurring in the future. For example, through tourism agencies and the Georgian embassy in Tehran, they can ask Iranian tourists to prioritize a trip to Georgia, including the exact travel plan, their booking and travel expenses, and have available evidence at the boarders. By communicating in the media and bringing together intellectuals from both countries, these misunderstandings will be resolved and the relations will be strengthened.