Over the past few months in Georgia, the spread of narratives regarding the threat of “Turkish expansionism” has intensified, as a number of pro-Kremlin actors, including media outlets and far-right Facebook pages, have increasingly characterized Turkey as an emerging existential threat for Georgia.

Turkey and Georgia have built a strong economic, diplomatic, and strategic relationship with one another. Of all its immediate neighbors — Azerbaijan, Armenia, Russia, and Turkey -Turkey is the only country with which Georgia has demarcated 100 percent of its border; the borders with its other neighbors are not entirely defined, mostly out of a lack of consensus between the countries and low political desire to resolve the issue. As Turkey is Georgia’s closest strategic partner in the region and the largest investor in its economy, the Turkish-Georgian relationship has attracted significant attention from pro-Kremlin actors. In particular, as a means of spoiling this close relationship, Kremlin allies have pushed narratives about the threat of “Turkish expansionism” in Georgia for several years.

The DFRLab identified several recurring anti-Turkey narratives among pro-Kremlin Russian and Georgian media outlets and Facebook pages. Among other claims, these sources alleged that Turkey sought to conquer or fracture Georgia’s southwestern Adjara region, that Turkish investors are taking over the Georgian economy, and that Georgian cities have become overrun with Turkish tourists. These narratives all factored into a broader effort to fuel anti-Turkish sentiment in the country.

How Anti-Turkish Sentiment Spread in Georgia

A particularly prominent conspiracy theory concerned the status of Georgia’s southwestern Autonomous Republic of Adjara, a semi-autonomous region in the country that borders Turkey. 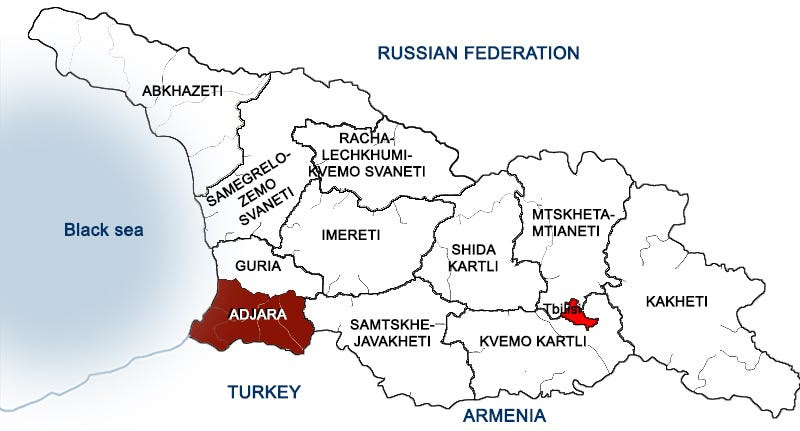 According to the conspiracy theory, Russia does not plan to extend the Treaty of Kars — which delineated the borders between the now-former Soviet Union and Turkey — after 2021; as a result, according to the conspiracy, Turkey would seize the city of Batumi when the Treaty expires. In reality, however, the 100-year-old treaty has no expiration date.

To lend the conspiracy theory more credibility, these outlets often referenced the “military expert” Jeffrey Silverman. Silverman is the chief of the Georgia bureau of the Kremlin-affiliated online outlet Veterans Today and a favorite expert commentator among Kremlin-run media outlets. Veterans Today often pushed various conspiracy theories routinely employed by the Kremlin, such as denial of Russia’s annexation of Crimea. Another anti-Turkish narrative appeared on the newly established Georgian online mediaTvalsazrisi.ge. This site was created on April 30, 2019, with no information on its “About” page. The narrative in question claimed that Turkey had announced its support to help Georgia’s Adjara region gain complete autonomy (i.e., independence from Georgia) in response to oppression of the region’s minority Muslim population. Tvalsazrisi.ge translated a June 6, 2019, article from the Russian media outlet Экспресс газета (“Express Newspaper”) with the headline, “Georgian Muslims are ready to gain independence by taking up arms” into Georgian. 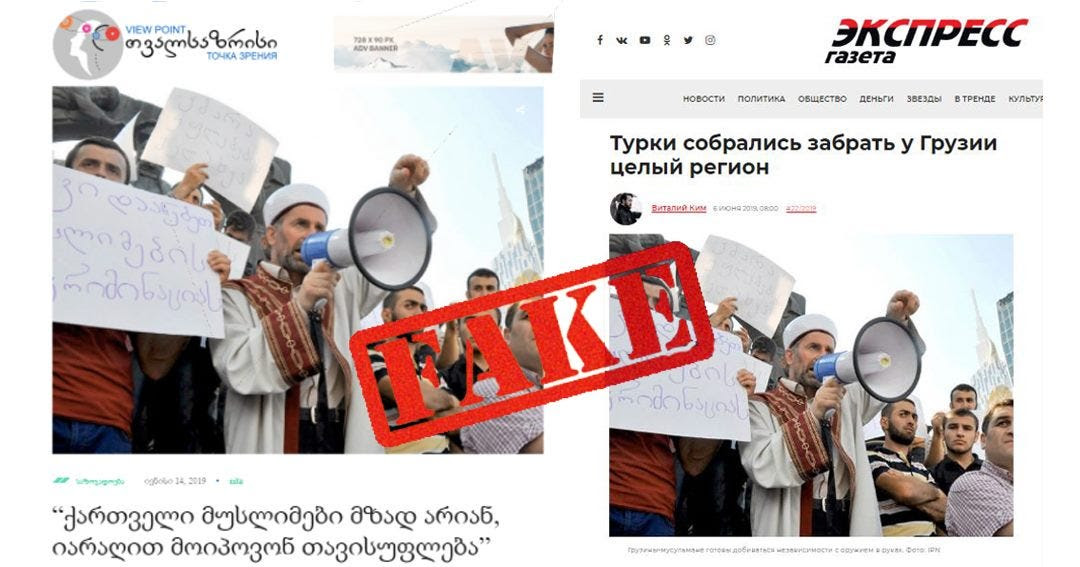 On June 23, 2019, a couple of days after the appearance of the Russian article, the YouTube channel “RusArm NEWS” dedicated a video to “Georgia’s Turkish problem.” The narrator in the video claimed that “[t]here is no Georgia anymore. Turkey is seizing the region from Georgia,” citing Express Newspaper as well as the Kremlin-owned outlet Sputnik, as its sources.

In its description, the channel described itself as a Russian daily news platform. At more than 22,000, the number of subscribers to the channel was significant, as the channel had only been active for two weeks at time of this analysis.

In total, the channel had only published 12 videos thus far. Seven out of the 12 claimed that Turkey was occupying Georgia and that Georgians were pleading with Russian President Vladimir Putin to intervene. Even at this early stage, it seemed that the YouTube channel was created to sow confusion on Turkey-Georgia relations, as well as on relations with Georgia’s other neighbors, including Armenia and Azerbaijan.

On June 23, 2019, the YouTube channel RusArm NEWS released a video titled, “There is no Georgia anymore. Turkey is seizing territory from Georgia.” The channel identified Express Newspaper, as well as the Kremlin-owned outlet Sputnik, as its sources, left; The videos uploaded by RusArm NEWS had the following titles: “The Peaceful ‘Occupation’ of Georgia;” “Georgians are asking for Putin’s help;” and “Georgia is killing itself;” right. (Source: @EtoBuziashvili/DFRLab via YouTube)

The DFRLab reported on Kardhu in May 2019, when it was mobilized to share anti-LGBT narratives along with its usual anti-Western and pro-Kremlin content.

Fringe Georgian Facebook pages spread the unverified story about Turkey’s intention to support Adjara’s Muslim minority in its bid for independence,translated from Express Newspaper with the headline, “Georgian Muslims are ready to gain independence by taking up arms.” (Source, left to right: კარდჰუ, [post since deleted]; ქართული ძალა, [post was shared from კარდჰუ]; Special Forces/სპეცრაზმი/archive)

Narratives About the Threat of Turkey’s Economic Expansionism

Pro-Kremlin media outlets also spread narratives about the looming threat of ‘Turkey’s economic expansion into Georgia.” These articles used sensational headlines and garnered a high number of views. Examples included: “Turkish Expansion: Who and Why is Really Buying Georgia,” with 24,852 views; “How Turks are occupying Georgia,” with over 9,200 views; “ and “Almost Turkish Georgia, or How Turks are Taking Control Adjara” with 29,420 views. Coverage Intensity and the Spread of the Narratives

To monitor the spread of the narrative about Turkey’s occupation of Georgia, the DFRLab scanned for mentions of the words “Турция” (“Turkey”) together with “Аджария” (“Adjara”) across online platforms in Russian using the online analytics tool Sysomos. From June 12, 2018, to July 7, 2019 — a one-year period — Sysomos registered 333 mentions of both terms together across all platforms, with a sharp increase in the number of mentions from June 2019 onward. In addition, the online analytics tool BuzzSumo showed that seven out of the eight most engaged articles containing the word “Adjara” in Russian during the period referred to the “Turkish occupation of the region.” A Sysomos analysis of keywords “Турция” (“Turkey”) together with “Аджария” (“Adjara”) showed a sharp increase in their mentions starting from June 2019 onward, at top; the dashed red line represents a cumulative total across platforms. A BuzzSumo analysis of the keyword “Аджария” (“Adjara”) in Russian showed that the most engaged articles during the June 2018-July 2019 period discussed “Turkish occupation of Georgian territories,” bottom. (Source: @EtoBuziashvili/DFRLab via Sysomos, top; BuzzSumo, bottom)

The DFRLab also scanned for mentions of the word “თურქები” (“Turkish people”) in Georgian across online platforms. For the same time period, Sysomos registered 535 mentions of the word. The mentions started to increase in November 2018 and have remained relatively high from that point onward. A BuzzSumo analysis showed that seven out of the eight most engaged articles containing the phrase “Turkish people” during the period of analysis discussed the Turkish people’s “takeover” of Georgia. A Sysomos analysis of the phrase “თურქები” [“Turkish people”] in Georgian showed an increase in mentions starting November 2018, top; a BuzzSumo analysis of the same phrase showed that the most engaged articles during the June 2018-July 2019 timeframe discuss how “Turkish people are taking over Georgia,” bottom. (Source: @EtoBuziashvili/DFRLab via Sysomos, top; BuzzSumo, bottom).

The spread of these anti-Turkish narratives across various online platforms has the potential to fuel anti-Turkish sentiment in Georgia, which would in turn distract the public’s attention from the looming threat of the Kremlin.

/Eto Buziashvili is a Research Assistant with the Digital Forensic Research Lab and is based in Georgia.

Nana Rapava is a Researcher at the Media Development Foundation and is based in Georgia.