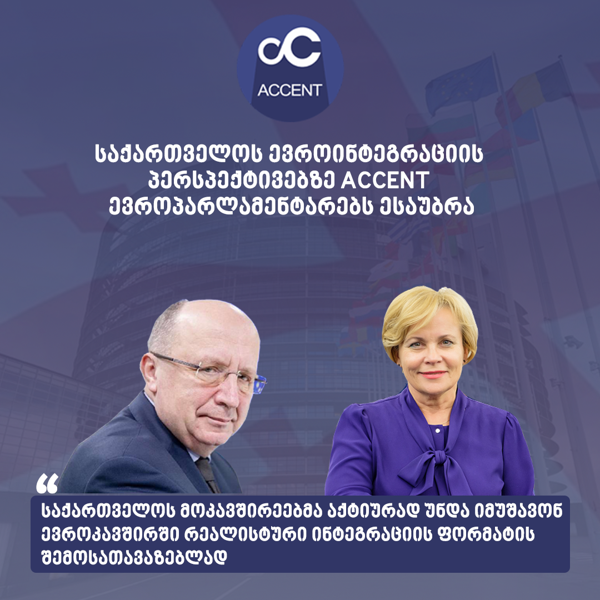 "If reforms continue in Georgia, Lithuanian Presidency of EU in 2027 will provide opportunity to push for next step towards gradual Euro-integration"

Lithuanian MEPs Andrius Kubilius and Rasa Jukneviciene spoke on Thursday about the prospects of Georgia's accession to the European Union and emphasized that “if the resolve to implement the necessary reforms remains strong in Georgia, Lithuanian Presidency of the EU in 2027 will provide an opportunity to push for the next step towards gradual Euro-integration.”

Chair of the Delegation to the Euronest Parliamentary Assembly Andrius Kubilius and Vice-chair of the EU-Georgia Parliamentary Association Committee Rasa Jukneviciene told the Accent that Associated Trio agreement is an important step to Georgia’s Euro-integration ambitions.

“It is a clear sign demonstrating the strong commitment to work together and to continue the path of reforms in all three countries (Ukraine, Georgia and Moldova). Reaching this agreement has also been an important step in making sure that Georgia, along with Ukraine and Moldova, remains high on the political agenda of the EU,” MEPs Jukneviciene and Kubilius said in a joint opinion sent to the Accent.

Prospects of Georgia's accession to the European Union

Jukneviciene and Kubilius welcome Georgia's ambition to apply for membership in 2024, noting that the entire pro-European Georgian political community should unite around this goal.

“As a recent CEPS report has demonstrated, significant progress has already been achieved, making the Trio countries, with Georgia at the forefront, comparable to those in the Western Balkans. But we have to be realistic and recognize that currently the EU, because of its own internal problems, is careful about accession of new members. This is why Georgia's initiative and willingness to make further progress is so important. We are convinced that to be successful, Georgian political parties need to set their differences aside and agree to focus on the Euro-integration agenda. It is of utmost importance to stay politically responsible, ensure the functioning of the rule of law and understand that a strong and viable opposition is an integral part of a healthy democracy.

We would like to congratulate Georgia’s ambition to apply for the EU membership in 2024. This should become the primary goal for the entire truly pro-European Georgian political community. Likewise, Georgia's closest allies within the EU should actively work to propose a realistic integration format that would correspond with the needs of Georgia and the EU. Such a formula could be the famous R. Prodi formula "everything (all membership benefits) except institutions". Hopefully, if the resolve to implement the necessary reforms remains strong in Georgia, Lithuanian Presidency of the EU in 2027 will provide an opportunity to push for the next step towards gradual Euro-integration,” Jukneviciene and Kubilius said in the joint opinion.