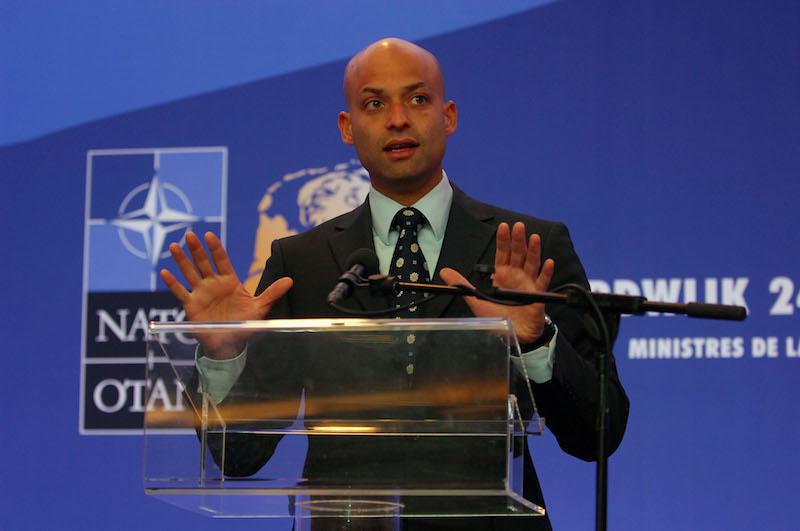 Appathurai  - NATO-Georgia relations are excellent at present and despite Russian opposition, steadily deepening

-Mr. Appathurai, political opponents often accuse the Georgian Dream (GD) government of being too loyal to Moscow. Representatives of GD explain their position by "a course of non-irritation of Russia", and it is known that the rapprochement of Georgia-NATO is one of the main irritating factors for Moscow. How would you assess NATO-Tbilisi cooperation in recent years?

-NATO-Georgia relations are excellent at present and despite Russian opposition, steadily deepening. There has never been more NATO in Georgia, including the Joint Training and Education Centre, the Defence Institution Building School, the NATO Office, and the regular rhythm of exercises and high level political engagements. And I expect the NATO Summit on June 14 will launch even more cooperation. Following this direction has been the policy of successive Georgian governments, from all parts of the political spectrum, and the cross-party declaration on NATO is another sign that Euro-Atlantic integration is in fact one goal, which unites the full political spectrum in Georgia.

-NATO welcomed the achievement of a political agreement by Georgia's ruling and opposition parties. As you stated before, “This agreement should serve as an opportunity to overcome the polarisation of politics in Georgia.” If this agreement is not fully implemented, how can it be reflected in NATO-Georgia relations?

-Indeed, the political agreement in Georgia is good news, for Georgians and for all of us in the international community who want to see Georgia succeed. I also appreciate the efforts by the EU and the US Ambassador to help make this possible. The focus should now be on its implementation. The Government of Georgia has demonstrated in various ways its commitment to do so; in the NATO context it has integrated the agreement’s key goals among the objectives of its Annual National Programme for 2021. This also means that we will monitor the implementation of the agreement and see it as part of Georgia’s preparations for future integration with the Alliance.

-NATO has recently strengthened its presence in the Black Sea region. In the light of the new reality created after the second Karabakh war and the current events in Ukraine, is NATO going to take any additional measures to properly deter Russia's aggressive policy in the region, and how united is the Alliance in these decisions?

-All Allies share the understanding that Russia is destabilising the Black Sea region including by building up its military capacity in Crimea. To ensure we can defend our Allies and support our partners, NATO will continue to enhance our capabilities in the Black Sea region. Three NATO members – Bulgaria, Romania, and Turkey – are littoral states and have their own forces in the Black Sea region, but ships and maritime patrol aircraft from other Allies also routinely patrol and exercise in the Black Sea and several Allies conduct NATO air policing in the region; and we support the Georgian Coast Guard with several capacity building activities. In Romania, we have a multinational brigade. At the same time, we are stepping up our cooperation with Ukraine and Georgia with more exercises, port visits and by sharing situational awareness. So in reality not only do we have a large degree of convergence of views on Russia’s role in the Black Sea region, all Allies also play a role in the implementation of the commonly agreed response measures.

-NATO Allies and partners are committed to ensuring that the Black Sea remains stable and secure. Russia is considered as a major threat to Georgia as well. Has NATO-Georgia relations intensified in the light of current events in the region? How active is Tbilisi itself in its contacts with the Alliance, has any new initiative been voiced by the Georgian side, has Tbilisi addressed Brussels with any proposal?

-This year, we have already received President Salome Zourabichvili, Prime Minister Irakli Garibashvili and the new Speaker of Parliament Kakha Kuchava at NATO headquarters and had fruitful discussions with each of them. As to our practical cooperation, the main vehicle of our cooperation has been for some time already the Substantial NATO-Georgia Package. Last year we revisited all aspects of this package and enhanced and broadened our level of ambition. We are now focusing on implementing each of the 16 initiatives of this strengthened package. An important aim is the intent to step up cooperation in building resilience against hybrid threats. We also have launched new initiatives in spheres such as military medicine, standardization and language training. Furthermore, we want to build on the close cooperation we have with the Georgian armed forces as a result of their participation in NATO’s operations in Afghanistan.

-What can Georgia expect from the next summit of the Alliance, which is scheduled for June 14?

-Georgia is an important partner for NATO and this will be reflected in the communiqué to be adopted on the occasion of the Summit. I assume the Summit will express clearly and unambiguously NATO’s support to Georgia’s territorial integrity and its Euro-Atlantic aspirations in line with the Bucharest decisions. It will also express NATO’s readiness to enhance our practical cooperation in various domains

-Russian propaganda has recently intensified around the world, including in Georgia. They sow the idea that our membership in NATO means refusal of the occupied territories and that Georgia must make a choice between NATO and the occupied territories. There is also a narrative that Russia poses a threat to Georgia because of its cooperation with NATO. What would you say about that?

-The Paris Charter of 1990 set out the right for the countries of Europe, regardless of their size or geographic location, to choose the security arrangements they deem fit; this is a fundamental aspect of the European security architecture. Russia clearly doesn’t abide by that commitment, despite being a party to it. But in NATO we do, just as Georgia does. Despite the friction it creates with Russia, we stand by that principle, and we will continue to do so. It is of course Georgia’s decision to seek NATO membership – Russia should respect that decision.

-After the second Karabakh war, regional actors support cooperation format of six countries (Russia, Turkey, Iran, Azerbaijan, Armenia, Georgia). Georgia is the only actor, which rejected this format due to the Russian factor. How does NATO assess this initiative and the perspective of this format? What threats do you see in this direction, including for Georgia?

-NATO supports regional cooperation in general, as it builds mutual confidence and enhances predictability and stability. More regional interdependencies can also contribute to security. However, it is important that the cooperation amongst states takes place on an equal footing and with the fullest respect for the sovereignty and territorial integrity – within their international recognized borders - and independence of all concerned. From this perspective, I understand the reservations, which the Government of Georgia may have about this form of regional cooperation.

-NATO peacekeeping mission in Afghanistan ends. Will Georgia still be able to contribute to global security? Are there any discussions in the Alliance about any new mechanism in which Georgia might be involved?

Georgia’s contribution to our operations and missions in Afghanistan has been very significant and greatly appreciated. The situation in Afghanistan remains complex, but it is now for the Afghan people to build a sustainable peace, founded on an enduring, comprehensive and inclusive peace agreement that puts an end to violence, safeguards the human rights of all Afghans, particularly women, children, and minorities, upholds the rule of law, and ensures that Afghanistan never again serves as a safe haven for terrorists.

Georgia’s contribution to the Alliance’s efforts has also resulted in a higher degree of interoperability between the armed forces of various Allies and the defence forces of Georgia. We will want to build on the experience gained and retain the high level of interoperability after the completion of NATO’s mission in Afghanistan. Georgia is one of NATO’s very few Enhanced Opportunities Partners, which opens up a range of tools to help us keep working together. And I am confident we will find ways to ensure that Georgia remains one of NATO’s principal operational partners.