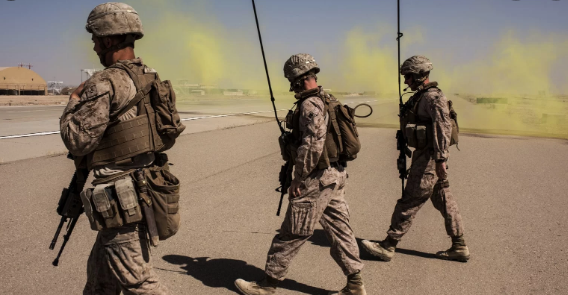 Is U.S. stepping back from Middle East?

On February 29 the U.S. and the Taliban signed an "agreement for bringing peace" to Afghanistan after more than 18 years of conflict. The U.S. and NATO allies have agreed to withdraw all troops within 14 months if the militants uphold the deal (The text of the agreement was released on February 29, although there are annexes that will not be made public, according to two senior U.S. administration officials). On March 9 the U.S. started withdrawing troops from Afghanistan. As for NATO allies, they are still continuing their mission in the country. The NATO-led Resolute Support Mission (RSM) in Afghanistan was launched on 1 January 2015. 872 military personnel from Georgia are involved in it.

“The Georgian contingent is not leaving Afghanistan at this stage. Georgia continues to consult with its strategic partners on future plans,” the Georgian Defense Ministry told the Accent.

“I believe the U.S.-Taliban agreement marks fulfillment President Trump's campaign promise to withdraw all U.S. troops from Afghanistan and end the U.S.'s extremely expensive investment in that country, regardless of the strategic consequences for the U.S. This pullout by Washington marks a strategic defeat for the United States, much like the ones previously suffered in Afghanistan by the British Empire and the Soviet Union,” he told the Accent.

According to senior fellow in Carnegie's Russia and Eurasia Program, Paul Stronski, “the U.S. certainly is stepping back from the Middle East under President Trump, but that is what many Americans seem to want.”

"Donald Trump is implementing his desire to create a more isolationist United States, which enables him to fulfill his promises to his supporters to bring U.S. troops and stop foreign military entanglements that cause U.S. lives. He clearly sees the need to do this before the November 2020 election in the United States.”

“What he did in the Syria undermines U.S. interests, but perhaps not his own political ones. It also doesn’t necessarily go against the desire of many Americans. We generally all think this is a bad idea. But, a more isolationist sentiment exists among a significant part of the American public. And, the agreement with the Taliban also is welcomed by the American people and many members of Congress too. Americans are tired of the 18-year old war. Trump’s election was in part the result of Americans being wary of U.S. soldiers serving as the “policemen” for the world. So, the deal with the Taliban now also is an attempt to show that he has fulfilled some of his campaign pledges before the U.S. election, even if it doesn’t really bring stability to the region. But, it looks like the deal might not bring stability. Taliban attacks continue, which highlight the fragility of the deal,” he added.

When asked, “Is U.S. stepping back from the region?” Ben Hodges, former commander of the US Army said: “I have mixed feelings about this.”

“It is hard to believe that we’ve been in Afghanistan since 2002, that we’ve spent so much money, and that so many young soldiers have been lost, on top of the numbers of civilians who have been lost, and it doesn’t feel like we are “successful”. For sure, there has been progress. And the collective sacrifice of so many allies and partners and Afghans has given Afghan society a chance to protect itself, govern itself and create new possibilities for their people. But that was not the reason we went there. We went there to rid Afghanistan of terrorist organizations that had attacked the USA and other allies. To make sure Afghanistan would not be a safe haven for Al-Qaeda or other terrorist organizations, who wanted to attack the West, perhaps we should have departed in 2003 or 2004, shortly after the Taliban and Al-Qaeda had been defeated, pushed out,” he told the Accent.

“Yet I worry about what will happen with this agreement, should it be implemented. What will happen to the thousands of Afghan woman whose opportunities and future are so much better now that they were before. I just hope that our withdrawal is done in close coordination and consultation with all of our allies and partners, who have been with U.S. in Afghanistan from the beginning. When history looks back at our efforts, the brave and honorable service of all of our soldiers will be respected and appreciated,” he added.

Research Fellow at Rondeli Foundation, Zurab Batiashvili believes that the withdrawal of U.S. troops from Afghanistan will not strengthen Russia in the region.

“U.S. influence in the Middle East region is not reducing, as it is not only determined by the presence / absence of the military. In addition, there is sufficient U.S. presence in the region. When U.S.-.Iran relations extremely strained in January, the United States dramatically increased its military presence in the region and has not reduced since then. Today U.S. maintains a strong military presence in Kuwait, Iraq and in Syria. Thus, I do not agree with the opinion that the withdrawal of American troops from Afghanistan will weaken U.S. positions and at the expense of this will strengthen Russian positions.” he told the Accent.

According to Batiashvili, "Russia has no chance of replacing the United States in Afghanistan.”

“Russia is involved in many conflicts, I mean Libya, Syria, Ukraine, Transdniestria, the Caucasus ... In addition, oil prices have suffered their biggest fall since 1991, the Russian ruble has collapsed; this is the maximum.”