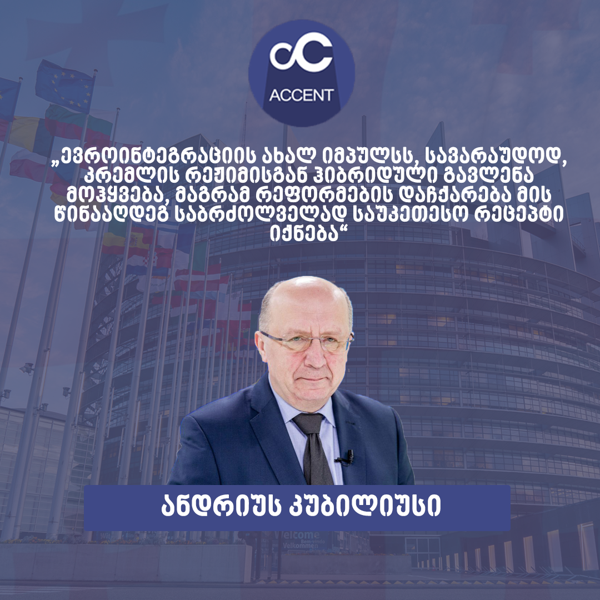 Georgia is preparing to apply for full EU membership in 2024.

“It is very good step and we support it. But it has to be well prepared,” Chair of the Delegation to the Euronest Parliamentary Assembly Andrius Kubilius told the Accent.

MEP Kubilius focuses on the steps that, in his view, will be successful for Georgia:

“Georgia needs to build the capacities for EU acquis communautaire implementation and it has to have a detailed plan with priorities and budget for the transposition of EU law, institution building plans, reporting on the progress made and the arrangements for the surveillance of this implementation. Georgia has to show it is ready to accept and implement the obligations of EU membership in advance of the application in 2024,” he told the Accent.

Political criteria as an important aspect for the EU membership

According to Kubilius, one important aspect in this process is taking on board of the political criteria, which is one of the central pillars in the Copenhagen criteria for the EU membership.

"The focus is on the political processes, stability of democratic institutions in the country, openness and dialogue, transparent finances and accountability of the parties, respect for the human rights and effectively functioning justice system and rule of law in Georgia. Reporting in advance on the progress in this area is very much crucial,” he said.

What can Georgia do next to the application for the EU membership?

Kubilius said that next to the application for the EU membership, Georgia together with the trio countries (Georgia, Ukraine and Moldova), could work out and lobby together for an intermediate membership status (EU antechamber or atrium) model, which would include the full benefits of the EU membership alongside the proposals made by R.Prody formula on 'everything by the institutions' approach.

The national strategy of Georgia could have an assessment of the current EU acquis transposition and the set the objectives for next steps of the EU integration to achieve the full EU membership benefits in the next years to come, for example, linking them with the EU presidencies – Poland in 2025 and Lithuania in 2027. This could be Georgia-2027 or Georgia-2030 EU integration and advocacy strategy. It can also include the findings of the CEPS study on the new momentum of the European integration, which has revealed that EU-associated countries are very much comparable with the Western Balkan countries and therefore deserve to be treated as such by the EU policies and methodologies for the next steps of the European integration,” he said.

On May 17 Foreign Ministers of Ukraine, Georgia and Moldova signed a trilateral memorandum on the start of enhanced cooperation on European integration “Associated Trio."

We can only support it. Going for the preparations as a group, also increases the chances for cooperation and dialogue and active work with the EU member states, as well as will bring new possibilities for the exchange of the best practices in doing the EU-related reforms. The national trio strategies and ideas, including those made by CEPS, on the new momentum of the European integration could guide further Georgia's work with the EU Member States.

The building of a new momentum for the European integration in Georgia and in remaining Eastern Partnership EU-associated countries, would contain the hybrid influences coming from the Kremlin regime in these countries. The acceleration of reforms in the EU-associated trio is the best recipe to fight corruption and the Kremlin interference,” Kubilius said.