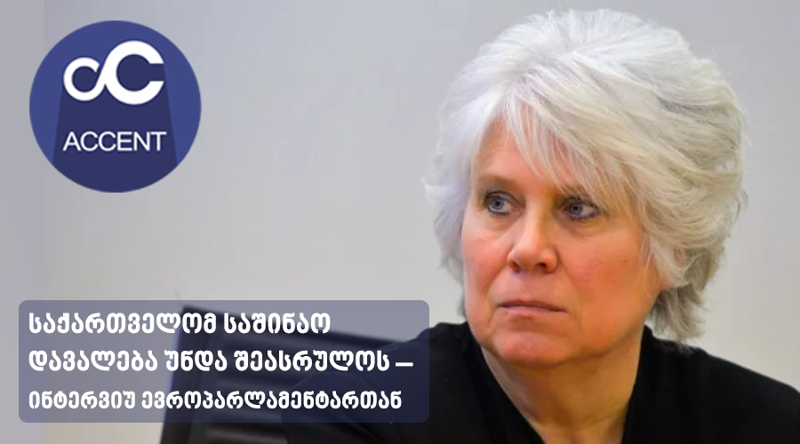 MEP Kaljurand - To be credible candidate for EU membership, Georgia must overcome its internal difficulties

Chair of the Delegation for relations with the South Caucasus and Co-Chair of the EU-Georgia Parliamentary Association Committee, MEP Marina Kaljurand’s interview with the Accent.

- Ms Kaljurand, given the new reality in the region and the Russian threat itself, in your opinion, should Europe take steps to accelerate the process of Georgia's accession to the European Union?

- The Treaty on the European Union states that any European country may apply for membership. That said, a number of criteria must be fulfilled – the so-called 'Copenhagen criteria'. There is no carte blanche; the countries that truly desire to join the bloc must do their homework – not only for the EU, but first and foremost for themselves. They must have stable, democratic institutions as well as a functioning market economy, and adhere to the aims of political, economic and monetary union. These core values are not negotiable.

- Georgia is preparing to apply for full EU membership in 2024. What would you recommend to Georgia for the application for membership to be successful? And if Georgia is not supported, can there be another initiative?

- On 30 December, the Parliament of Georgia adopted its resolution on the foreign policy of Georgia, highlighting strategic priorities for 2021 –including the objective to apply for EU membership in 2024. This is, obviously, very ambitious, in a positive way. The Georgian authorities must live up to these promises – they do not owe it to us, but before all to their citizens. The recent stand-off between the ruling party and some segments of the opposition did not help with that cause. The EU-brokered agreement, signed by most of the parties on 19 April, offered a way out of this crisis. Now, the political actors must find a way to work together, in a constructive manner, in the Parliament; this is how mature democracies work. The agreement must be thoroughly implemented, in word and spirit. The European Parliament is ready to help, for example through mediation activities such as the Jean Monnet Dialogue.

I truly believe that Georgia is a credible country for EU membership: after all, it is ranked before many EU Member States and most Western Balkans countries in a number of areas – such as economic / business freedom, adult literacy, income equality or corruption perception. But this is not enough, and as we all know, the final decision for a possible membership will be taken by the EU Member States. As I said, whether we like it or not, the jury is still out: EU Member States and their public opinions needs to be convinced. So, to be a credible candidate for EU membership, Georgia must overcome its internal difficulties, strengthen public institutions such as the Parliament and the judicial system, as well as the rule of law. Achieving this goal also requires a thorough implementation of the Association Agreement. I would say that the EU and Georgia have already a special partnership: the Association Agreement, including the DCFTA, are very ambitious documents, and Georgia actually goes even further already. Besides, I am happy to see that our three associated countries (Georgian, Moldova, Ukraine) are enhancing their cooperation on the path towards European integration, which is very encouraging.

- You mentioned three associated countries. On May 17 Foreign Ministers of Ukraine, Georgia and Moldova signed a trilateral memorandum on the start of enhanced cooperation on European integration "Associated Trio." What opportunities does this agreement open for these countries?

-There is already an intense cooperation existing between the Parliaments of Georgia, Moldova and Ukraine. In addition, as you point out, on 17 May, the Foreign Ministers of our three associated countries signed a memorandum on establishing the Associated Trio format. They outlined EU membership as a key goal and pledged to cooperate on common issues of European integration, including for the implementation of their respective Association Agreements, and the further development of the Eastern Partnership. I think that this step is very positive, because the three associated countries have similarities but also different features and they can learn a lot from each other via exchanges of best practices. Also, this initiative is important because it put the principle of ownership back in the centre of the Eastern Partnership policy. I believe that the deepening of our relations could be the antechamber of a future widening of the EU, when these countries are ready.